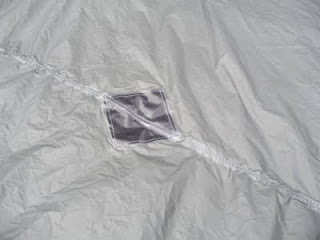 Reinforcing patch and sealed seams
I've owned a Golite Hex3 for a number of years. It was bought so I could take my son on camping trips because at the time the only shelters I owned were either too small (a Mountain Hardwear PCT1) or too heavy (a TNF Nebula).

In the past I used non fitted groundsheets usually single person polycro ones but for half term I needed to maximse the space available in the tent, so it would accommodate the three of us, plus Harry, and our rucksacks. And knowing that Ben would bring along some Halo or Gormitti figurines which would easily get lost in the grass I bought a floor. There is no problem with retro fitting a Shangri-la 3 floor to a Hex3.

And it worked. We had all the space we needed. The bungy loops go over the guy outs and there's clips to raise the top edge to the loops sown into the shelter walls. The depth of the bathtub depends on how high you have the edges but I would say that even if you have them fairly low there is still some protection from standing water. 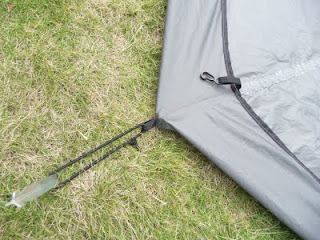 Clip and bungy guy out
The Hex doesn't have a porch so the groundsheet goes up to the door, some might find this a bit of an issue if you were needing to cook under cover, but it's an easy matter of unhooking and unclipping the groundsheet from the door guy out point and pulling back the groundsheet.

The groundsheet has a reinforced patch in the centre but I also packed a lid from a Xmas pudding pot and stood the pole end that for added protection. With the shelter that crowded I knew that the pole wasn't going to be dead centre anyway.

My only grumble is that I bought the 2010 version of the floor which was advertised as being lighter than it's earlier incarnation at 425g, however on my postal scales it clocked 520g! That's big difference in weight.