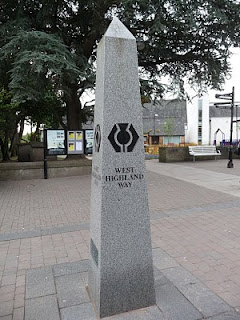 Is this the start?
A short notice smash and grab affair that was worth the miserable return overnight coach journey from Glasgow.

We weren't a mile down the way when we met a couple of women heading towards us. "Are you doing the West Highland Way?", they asked. "Yes!", was our reply. "Good, because we're lost..."

Having set off earlier that morning with an A4 laminated map they had somehow managed not to follow the Way. As we headed along it was very apparent that they were going to have trouble navigating their way to Fort William. Several times they asked, "How did you know to turn here?", to which our reply was always, "See that signpost over there..."

We escorted them as far as the distillery where we turned off for a quick supply visit. Back on the Way we made good progress getting to East Drumquhassle but it was too early to stop. A quick check on the campsite reminded me that a fiver for a night spent on something as lumpy and sloping as that would be a waste of a good drinking voucher. A terse exchange with the campsite owner over 500ml of water did nothing to change my mind. I didn't realise that water was such a precious commodity north of the border...

In the Garadhban Forest Liam and I stopped for a brew and chatted with various wayfarers as they passed. The weather had been good all day and despite the forecast for showers they had been few and not particularly bad but as the afternoon progressed however they became more frequent and more intense. Once out of the forest we could see that the weather was closing in so a hunt for a spot was on; the official 'wild' camp spot on the edge of the forest had long vanished with the trees. A quick look at the map revealed a couple of potential sites near the Burn of Mar at the 17.5 mile mark. A fairly flattish spot with a view of Conic Hill and Loch Lomond was found close enough to the Burn for ease of water supply but far enough away to keep the babbling of the burn to a hushed silence. 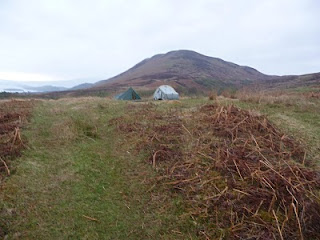 Conic Hill, the fault line, and Loch Lomond
At this point I was pleased at how easy the Scarp1 is to pitch, in very little time and with no fuss I was happily ensconced in my home for the night with a pot on my stove heating water for some soup. Outside I heard Liam cursing as he fiddled with the many guys and pegs of his Jetpacker.

A few words on the Scarp1. Apart from ease of pitching, which at the end of a long day when you're tired, hungry, suffering from hypoglycemia, and getting rained upon, is worth more than a multi million winning lottery ticket (well sort of); there's the space. The second porch took the rucksack, damp waterproofs and trainers. And in the other I had space to cook, although I pegged the inner back to create more headroom above the stove. Internally there was space at either end to fit the rest of the kit that I was carrying, which wasn't that much given I was using the Golite Peak.

With supper eaten, I settled back and sent messages home. As the light began to fade, I started a sudoku puzzle, had a dram or two of whiskey, and with the puzzle half done I drifted off to sleep...

Good one Baz. The Scarp is superb. So easy to pitch and so roomy. A palace amongst 1 man tents.

Scarp is good and the tale is getting good. Keep it coming.

Now that I've sussed a way of packing in (on?) the Golite Peak, the more I use the Scarp the happier with it I've become.

I can't believe the tale of the two women being lost a mile into the WHW... or maybe I can, given the hordes from everywhere who do this trail.
I didn't know about an official camp spot, we pitched in the forest on the only good bit of ground.

How is it going baz? Things seem to have gone quiet....

are you still on the West Highland Way?

In the bloggersphere I went sleep under the view of Conic Hill and have't yet woken up.

Good post. Looking forward to more tales. How are the Midge?