I stopped by the Kew branch of the The Good Wine Shop on the way home from dropping off Christmas presents for Ben, to pick up a bottle of La Flor to go with the sausages, and a half bottle of Rutherglen to go with the pud on Christmas day.

As always the very large (and very expensive) bottle of wine, that used to adorn the counter at the St Margarets store, is still sitting there. And as always the bottle became a talking point. I joked that I wished I had my camera with me so I could take a photo of it and post something about it on my blog. But as I hadn’t, the next time I was passing it would have been sold, so I took a snap with my mobile phone… 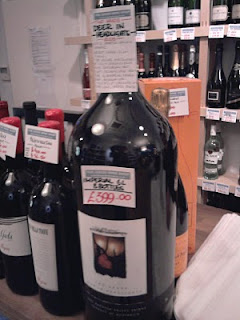 I also joked that if the photo was too blurry it still might get sold as I’d have to come back to get a better shot. Being a talking point The Deer in Headlights bottle has become a sort of emblem for this small independent, so it’d be interesting to see what they do if someone makes them an offer they won’t refuse.

So if you’re in the area pop your head around the door, and a strike up a conversation about the very large (and very expensive) bottle of wine.

Email ThisBlogThis!Share to TwitterShare to FacebookShare to Pinterest
Labels: Food