Another bright and sunny day. And as we broke camp a phone call came from Penny’s parents to find out where we were. They were cooking an East Sunday supper for us and her two sisters who’d travelled down from London the previous day and they wanted to pick us up so we wouldn’t miss it.

Our progress so far had been embarrassingly slow but we were enjoying ourselves and that’s what mattered. And with another late start it was going to be a hard task to get to Exmouth by the end of the day, so the plan was to pull up short at Budleigh Salterton. 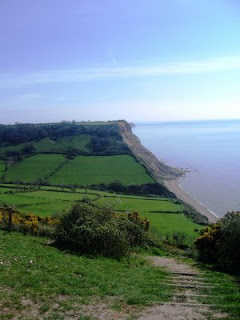 Looking back across Salcombe Mouth

We picked up the coast path using a slightly longer and diagonal path out of Salcombe Regis to make the ascent to the first high point of the day slightly gentler. Dropping into Sidmouth we went on a search for some sun block and a few supplies. Having decided not to queue for an ice cream in Branscome Penny finally got her wish and had one from the shop in town. The climb out of Sidmouth was as previous days although not quiet as severe as others. As you progress along this stretch of coast the rock changes from limestone, to greensand to sandstone and the colour of the cliffs change accordingly. 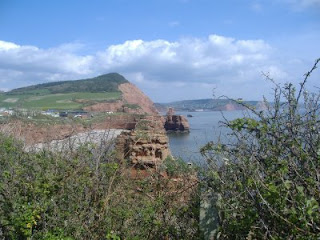 Over Peak Hill, the first bump in the coast of the day, brings you to Windgate. (I’m guessing it gets it’s name from the fact it sits between Peak Hill and High Peak and as acts like a funnel in the right weather conditions.) After High Peak the path drops and adopts a more gentle rolling way along the coast. We passed the campsite at Ladram Bay and was glad of yesterday’s decision not to press on; it was an ugly, over crowded piece of real estate that we couldn’t wait to leave behind. 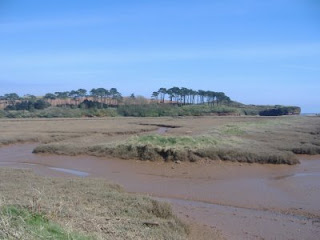 At the Otter Estuary the path heads inland for a kilometre to a bridge before heading back down the western edge of the estuary this time there was no luxury of hitching a ride on a tram. Like the wetlands at the mouth of the Axe this area had also been designated a nature reserve and if we had the time, patience and binoculars we could have twitchered for a bit. But instead we walked into Budleigh Salterton called for our lift and decamped to the grottiest pub that we could find (not as difficult as that would seem).

Crikey - I missed you by a matter of days!

Is the weather still fab down there?

The weather was warm and sunny but in the shade there was a bite in the air.

I bet those photo's don't do it any justice either! i have been on the coastal path before but am staying in a lovely Devon b&b, England styled short breaks are the best you can keep the trashy themed parks and queues, I just want to be far away from noise and relax and fish!