"You'll get to see Waylands Smithy," I said, and she was sold. Gear chucked in car and off we set stopping to buy an OS map; the chance of finding Britchcombe Farm was slim without one.

Arriving after dark we pulled into the field that I'd camped in when on the Ridgeway a few years back with David Topley arriving just minutes after, followed by Graham. Introductions made and heads scratched as there weren't many Lasers and Atko's to be seen. A chat with the farmer a little later revealed that the bulk of the club were in another field including a Doppelganger David. 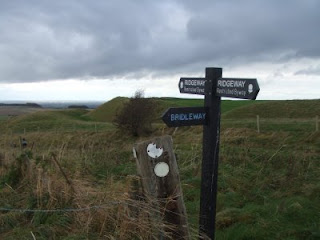 Graham, Penny and I headed off leaving David to sort out paying the farmer, who's wife was equally confused by the 'other' David... We met up with Martin at the start of the haul up hill to the Ridgeway path. Martin easily won the prize for having the biggest rucksack on the meet with a stonking 70litre plus Deuter bag. 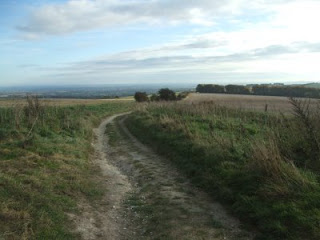 By Uffington Castle we bumped into Ant who was deliberating whether it was worth taking a wander over the edge of the ridge to see the white horse. The views from this point are expansive, with the path clearly visible for miles as it wends it way east.

The going was good under foot and we soon found ourselves at Waylands Smithy where we took a break and where the rest of the group caught us up. The meet had attracted a sizeable crowd and a little way along the Ridgeway the group fragmented with Ant carrying on to Fox Hill and David, his two lads and Steph, taking a detour to Bishopstone to find out if the PH was still there. The rest of us headed south towards Lambourn along various byways next to gallops and fields of poppies and wild flowers. A leisurely break was taken at a pub in Upper Lambourn before the the last few kilometres were walked to Farncombe Farm. 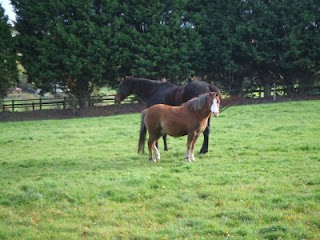 A word of warning about Farncombe Farm, well several actually. It's one of the most sloping campsites I've ever had the misfortune to pitch a tent on. And it only has two toilets... and it's a favourite of schools with pupils doing their DOE. That said once food was cooked and eaten and the bottle of wine grabbed on the way through Lambourn was drunk, I was soon asleep. Somehow I managed to stay on my mat where all else migrated to the bottom end of the tent, Penny included.

The day dawned gray and most were up and away before we had time to take the tent down. We faffed around the campsite and were the last to leave. Once under way, despite my knee still twinging, we made good time and caught up with the group at the Seven Barrows.

From there we headed up a couple of tracks that skirted gallops and fields heading north to Uffington Castle. From the castle we agreed to drop down so that we could see the white horse however a good view isn't really that easy to have from this close, even from the road. On the way we passed Dragon Hill which looks a bit like a mini Silbury Hill.

A short walk from here took us back to our starting point a day earlier where we said our good byes.

Sometimes doing something on the spur of the moment can be very rewarding and this weekend was no exception. Despite the fact that there wasn't a pub to gather in on the Saturday evening the weekend was a very social one with lots of good conversations, and not all of them about gear I hasten to add.