stone circles and a circular walk 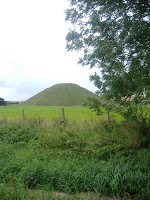 During the many downpours the evening before we ate curry, studied the map and devised a route that would capture the monuments and sites in the area we wanted to visit.

Leaving the car at Overton Hill we popped over the A4 to the Sanctuary the site of a stone circle, the stones of which long vanished. From there we followed a track down to the Kennet, a thin sliver of a river, and onto the poorly way marked White Horse Trail. The trail leads back to the A4 by Silbury Hill but not before a short detour to West Kennet Long Barrow was taken. The weather continued to improve and the weak showers got weaker and fewer as the day progressed.

From the bizarrely out of place conical shaped Silbury Hill the trail follows the Kennet into Avebury where we stopped for tea. After a quick circuit of the stone circle we picked up the trail again and followed it out to Windmill Hill. This is probably the least visited site in the area as it involves more than the usual 50m walk from the car park! Which is a shame as the views from here across to the Ridgeway and south towards Silbury Hill are quite pleasant.

At Windmill Hill we opted for a route change. Rather than head further north to pick up the Ridgeway at Monkton Down we'd drop down and pick up the Wessex Ridgeway and follow this back through Avebury and onto the Ridgeway as it crosses Avebury Down.

By now the late afternoon sun was blazing away so we took a refreshment break in Avebury as we passed through before rejoining the various Ridgeway's and following them back to Overton Hill.

Sounds good - what sort of distance would you say the route was ?

Well as it happens I had my geko with me,and according to him it was 12 miles.