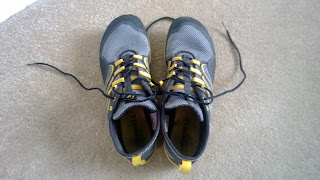 I was toying with the idea of trying a pair of these for backpacking last year but for whatever reason I never got around to buying a pair. Fortunately for me I got sent a pair of Trail Gloves for review.

Merrell Trail Gloves utilizes barefoot technology something that I’ve been intrigued about although from what I’ve read it is a matter of great debate in the runner world. I usually wear Innov8 Terroc 330’s for walking and general use so in order to make the transition I wore the Trail Gloves on the walk in to work and home not a great distance but enough to start to see how they work. It was still fairly cool (and let’s face it we haven't had much of a summer) but my feet stayed comfortable with the mesh top apart from in the keenest of breezes but I’m used to that with the Terrocs. Despite a reservation about how thin the sole of the shoe might be, they coped with walking over the nobbled dropped kerbs at road crossing. And I went out of my way to find as many different surfaces as I could. 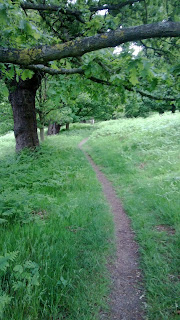 I then progressed to longer walks and short jogs. And it was the later that I found the most interesting my feet felt incredibly ‘free’ and I started getting a taste for running! This was something of a shock because I’d never really fancied the idea probably being put off by enforced cross-country runs whilst at school. I’m incredibly lucky living close to Richmond Park as that meant that I was able to make use of the park to run in but also pick a route that had climbs, descents, streams and logs to up in other words it was interesting and fun (and a bit like cross country but far removed from an urban north London ones I had earlier experienced).

I was about to progress to using them on a backpacking trip when I suffer an injury to my knee, the left one which I pranged on the Pennine Way a little over a year ago. Not by running, walking, biking or climbing but by trying to fix a light. Stupid, stupid, stupid. 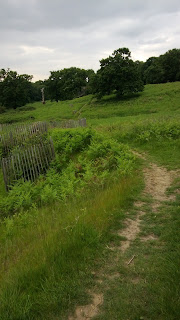 Nice drop to stream and rise in distance

I’m working hard with the treatment so that I can get back out running, and of course filling my Golite Peak with a few bits and pieces for gentle backpacking trip as I don’t want to overdo it too soon.

Merrell footwear is available from www.fitnessfootwear.com

i have been playing with the idea of switching to barefoot shoes for a number of yars now but just a little nervous maybe now ill finally switch.
p.s
good to see you blogging again

I'll try and trickle stuff as it comes to hand...