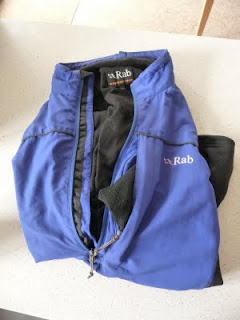 I've had one of these for two years now. Although intended for high activity use, it has reflective piping on the shoulders and back, it's become a regular piece of backpacking kit for the cooler months.

RAB clothing is a good fit for my body shape and has a nice close fit. The sleeves are over long and have thumb loops which is a useful feature that I've used a number of times. Particularly because it doesn't have any where to stuff your hands. It has a dropped tail to cover my bum, the deep front zip helps to ventilate when the going gets hard, and there's a napoleon pocket that will take an OS map. Now it might seem like a good idea if an item of clothing stuffs into one of it's pockets, after all you won't need a stuff sack... But since the pocket isn't tethered internally when you try to take whatever is in there out it invariably means the pocket will follow more so if your hand is damp, which I find irritating.

As already mention this garment is meant for high activity use, so it doesn't have a hem cord but it's some thing that I find useful for the use that I put it to. However it does have one for the collar. I presume this is for sealing the neck to stop rain running down your back or to keep warm air in, whatever it's intention I've never had call to use it.

The material, Pertex Equilibrium, is wind resistant not windproof and this makes it more breathable, again a feature that is found in this type of top. The idea is that if you're running you generate heat so you need better breathablilty, and allowing some breeze through will have a cooling effect thus creating balance, or as the name suggests, equilibrium. Similarly it's shower resistant not waterproof, the surface material dissipates the rain over a large area to aid evaopouration with your body's heat driving the drying process through the lining material. Wear this when it's raining and you'll be damp, warm damp depending on how hard you're working.

Although it's not windproof enough for my liking, there's no hem draw cord and no pockets, it's something that I can put on over a base layer and be comfortable in a range of conditions. And that's why it works for me.

Brilliant bit of gear. Mine has a rollup hood, hem drawcord and big handwarmer pocket. It's more than two years old though. Did they get rid of those features?

They may have done, mine's very much a running/biking type top. Hand warmer pocket do't have much use on a bike:) And for that matter if you run. A hood would be good though.

A superb piece of kit. Mine is over 7 years old - one of the very first, with the features mentioned by Alistair. Brilliant for summer trips to the Alps, and for winter use in the UK. Mine refuses to show signs of wear.

It even found it's way in to my rucksack for the Shropshire Hills trip that I've just got back from!