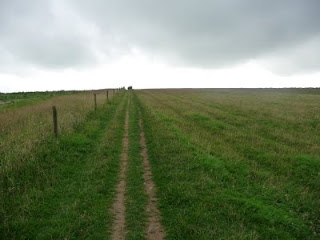 Easy going downland track
We left the car in Kingston near Lewes and after a short, sharp haul up the side of the south downs ridge we were on the Way.

There was a stiff southerly breeze blowing across the ridge and the sky was threatening rain that fortunately failed to materialise. Although my hands became clammy from the moisture laden air. The path is well marked and well worn, and was busy with other walkers and mountain bikers. This section is all bridleway, and much of it wide enough for walkers and bikers to pass easily but some is single track which made for some interesting occasions. Only one twat sliding down a gravel single failing to brake had us jumping out of the way, which spoilt what was up until then, a happy co-existence between us and two wheeled users of the Way. 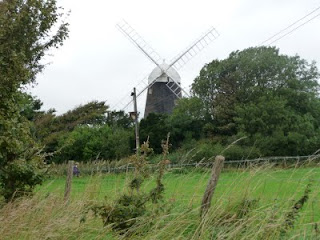 Jack, or is it Jill Mill?

Rolling down land passed easily under our feet as we headed west. And the views from the whale back ridge north and south were expansive; the south coast and sea on our left, and the Weald and North Downs in the distance on our right.

The National Trails website lists a pub at Pyecombe that has basic camping and this was where we hoped to pitch up. Unfortunately as we got closer to the pub the noise of the road began increase; it became very clear that any hope of a peaceful nights camping wasn’t going to be had. There were a couple of water points ahead and potential wild pitches so we pressed on. The sun was starting to set as we neared the hostel in Truleigh Hill so we knocked on the door to see if they’d let us pitch in the grounds, a gruff voice answered the intercom and told us that they ‘were not operating.’ When asked about alternatives or suggestions we got the brush off. A jarring irony when taken in contrast to the original plaque that stated the YHA mission to provide a welcome to all travellers… At least the tap was working so we filled up and headed back to where we’d seen a potential pitch by the telecom tower. Not the best location, so we dropped down and found a small flattish spot with a bench and a view across the Weald and along the Fulking Escarpment. After a meatball supper and half a bottle of wine we turned in. 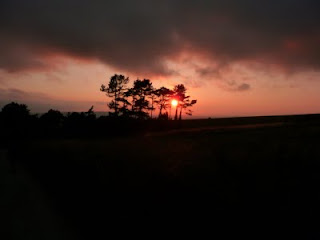 I woke early and put on a brew. We wasted no time in getting the tent down and the gear stowed away but we lingered on the spot as the sun crept over the downs. Across the Weald pockets of mist and fog covered the land and in the distance a lonely church spire stood as if on an island in a white sea. 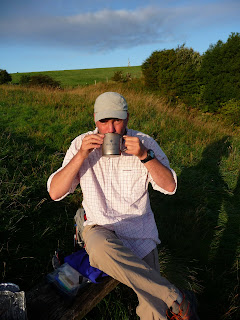 By the telecom tower we found that a couple of guys had pitched a tent on the spot that we’d surveyed the evening before, after a brief chat we headed west along the Way stopping at the hostel for water and to dump our rubbish. The route runs on a road from here past Beeding Hill before dropping down a enclosed single track to the road. A couple of early morning mountain bikers pedalled up in low gear past us without incident. 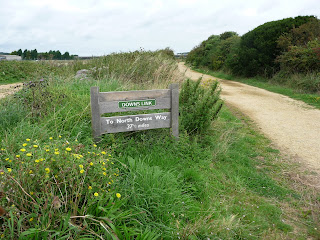 Crossing the main road we picked up the Downs Link into Shoreham. I stood on the path, a disused railway line, looking north and thought, just thirty miles along this track was home. But that’s for another day and turned south to Shoreham where we picked up the train back to Lewes.

Isn't it sad that your exprience of the YHA will not come as a surprise to anyone?

I became a member of the YHA for my LEJOG in 2007 and only managed to stay in ONE hostel in England - and that was with a curmugeonly welcome too!

The SYHA (Scottish) are so much better.

Very sad indeed. I joined the YHA back in my teens, as an insurance/fallback policy. I knew that if I turned up tired, wet and bedraggled they'd sort me out.

My experience of the SYHA is how I'd expect the service to be.

That said we ended up on a loverly little spot, that cost nothing and had a view to die for :)

There is a small campsite in Small Dole, £2.00 for the night (I think)but it would mean that you would have to drop off the ridge.

Info for next time maybe :-)

George, We were using a Harvey's strip map. I annotated the map with the campsites listed in the LDFP directory from the Backpackers Club so the site at Small Dole, although mentioned in the directory, was off map.

I'd always assumed that the SDW would be very difficult to wild pitch satisfactorily. You never know when a good spot like yours might come along, but they must be few and far between.
We wild pitched the Ridgeway a few years back, but it was in October and far from easy.

Geoff, I remember your posting about the Ridgeway especially the one about the wild spot near Nuffield. I was going to put tent up on very same spot but in February there wasn't any cover from the trees! I ended up camping in the beer garden of the Crown instead :)

We were lucky. If we'd taken the Hut we could have bivied at a stretch fortunately the Wasabi has a small footprint.