Picked up Ben on Saturday morning and headed off down the M3 to meet Darren and his pack of hounds, on his usual stamping ground of Fleet Pond.

This is an important piece of open space that the area sorely needs. Bounded by busy main roads and a high speed rail line, along with the proximity of an airport it's difficult to find peace here but wander off the much trodden tracks and involve yourself in the resilience of nature and you will be rewarded. Just don't touch anything that looks like a UXB.

A circuit of the pond was made with me carrying Ben on my shoulders part the way back to the car - he'd played an hours football before I'd picked him up so this was allowed. Part way around we stopped at the beach for a brew. 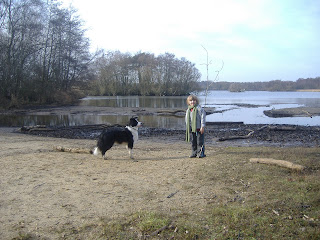 Ben with Strider on the beach.

Eschewing my Bush Buddy for an AGG Pepsi can stove I wanted to reacquaint myself with this type of burner as I am considering taking one to Spain in the summer. This stove works better with wider pans as it has side jets, so I need to pick Darren's brains for a suitable spirit burner that will work with the pots I use in conjunction with my much favoured Bush Buddy.

The weather was billed to deteriorate throughout Sunday and before we headed off to Holmbury St Mary we already had a flurry of snow. Not daunted by this but encouraged by it I was keen to get Ben, Harry and Penny out as soon as I could. From the village green in Holmbury St Mary we headed up a broad bridle way dodging groups of mountain bikers who were making the most of the crunchy mud. 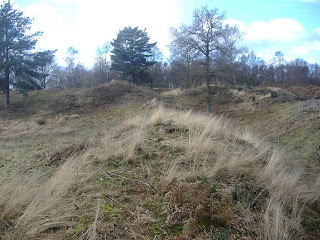 At a crossroads of paths and horse tracks we picked up the Greensands Way and followed this up to the trig and information point at the top of the hill. Cold sharp north easterly winds buffeted us as we took shelter and drank coffee and ate chocolate to fortify our return journey - the sky had grown dark and a shadow that spelt snow was heading our way. No sooner than we had left the hill the air was full of flakes; not large fluffy flakes but fine pin meal, some times star shaped, snow was falling. 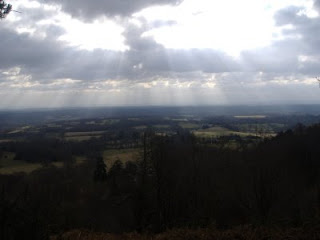 Back at the car it was time to head home, the snow had stopped falling and the sky gave no indication of what was to come.