Picked Darren up from the station on way around the usual Saturday morning taxi circuit of Guildford. With the car parked at Shalford Park we had a brief chat with a couple who were walking the way east to west and set off towards Dorking. The route slowly climbs past Chantry Wood and up to St Martha's church where, at a height of 525ft, the view opens out to reveal the line of the north downs to the east and views to the south and west.

From St Martha's the route wends it way through woods and across open down land to Newland's Corner, where Darren bravely tackled a bacon roll. He offered, and we accepted without hesitation, a wee dram of whisky - a potent mix of peat and smokey sweetness.

From the A25 the way follows a drove road through wooded down land. The gales of 1987 destroyed a number of trees along this section which created gaps allowing glimpses south. With all this wood around it was an easy matter to find some dry twigs to fuel the Bush Buddy and lunch was taken on a moss covered bank. 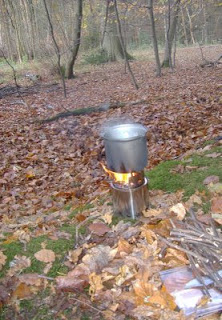 Earlier in the day I had snaffled the Trail Blaze poles off Darren that Bob had sent him. Given the on going knee problem this was a good opportunity to give a potential life saver a thorough try out. At the halfway point or thereabouts I was in no discomfort and had adapted to walking with poles. There is little ascent and descent on this stretch of the way so I had no way of testing whether they'd help in this situation but for now I was happy with the result. One minor quibble with the poles though the pull string seemed to work it's way loose and cause the pole joints to click. A half hitch around the shaft helped but that also worked loose eventually. As these were second hand poles they came with no instructions so perhaps we were missing something. That said I think a couple of mini line loks might do the trick. Despite this I was very impressed with the lightness of the poles, and will be buying a pair later this week. (Bob has since posted on Darren's write up of the day and apparently there is a locking knot that needs using.)

Emerging on to White Down, Dorking and the Denbies Vineyard hove into view. Scattered across this stretch of the hill side were a number of brick built pill boxes, some more crumbling than others. I stopped to point out the wild clematis seed heads, otherwise know as old man's beard, which makes great tinder (I've become something of an avid tinder spotter since got the BB).

The route crosses Ranmore Common and passes St Barnabas Church, entering the Denbies Estate we took a detour through the vineyard to shorten the walk along the busy A24 to the station. 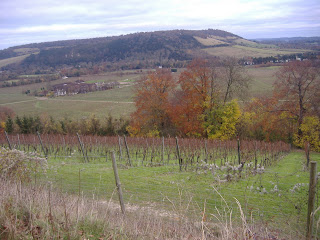 Another good day out with Darren and I'm wondering when we'll get a chance to complete more of the way with him. The next leg between West Humble and Merstham is only 9 miles long and lies on the same rail service but beyond Merstham however the public transport situation becomes more problematic.

nothing brave about the bacon roll,I was channeling Duncan at the time. ^__^