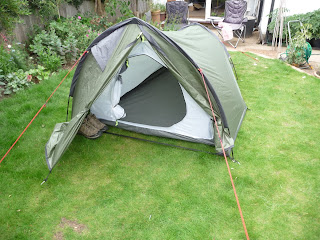 I was asked to select a tent from those that Millets stock so naturally I went for the Eurohike Backpacker. As it would appear very odd for me to post a review on something that has a frame, sleeps four or more people, and requires the use of a car to transport it!

The tent is a two person, two hooped tunnel one that weighs 2335g without the peg and pole stuff sacks. Splitting the bits between two gives roughly similar weighing bundles. The poles are colour coded as the rear of the tent is lower but it's obvious which one should go where. The height at the front of the tent is 90cm which is too low for me. The inner is solid with mesh at the top at the front and rear, it also has a pocket either side and a hook at the apex, nice touches but pretty standard these days. The space in the inner is what I'd call cozy for two with little room for storage. This isn't too much of an issue because there's space between the inner and outer to store stuff, and whatever you can get down under your feet. The porch space is quite roomy too. Access to the inner is by a left biased D door, and I would personally like it wider on the right to make it easier to get in or out without trampling on your partner. 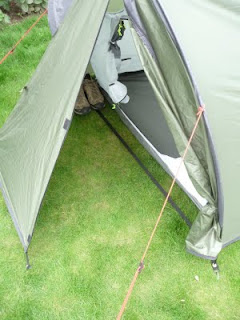 It pitches outer first which is always a bonus in the UK because we have weather not a climate! The outer has four guying points, two on each hoop, given that tunnel tents have little rigidity across the width of the tent it does flap. Pitching it tail to the wind would help but I'd be inclined to double the number of guys using the second set to add rigidity to the poles. The outer has two vents at either end to aid ventilation with the rear one with a Velcro closure. The door opens on the left so you can create an area that is covered and ventilated should you need to cook under cover. As already mentioned the porch space is good, easily accommodating a two pairs of footwear even smallish rucksacks. But with the entrance to the side I'd keep the area uncluttered which would make it easier to get in and out of. 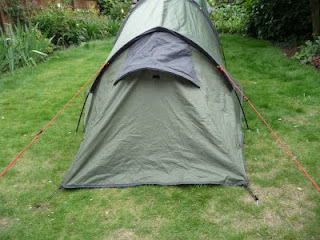 There is a slight design flaw with the tent. The foot end of the inner clips to the guy out loops of the outer unfortunately as these guy out points are elastic and the pull on these by the inner means that the flysheet wouldn't set properly and became baggy This meant it flapped, and didn't shed water as well as it should. To remedy this I used an extra two groundsheet spikes. Although I didn't try this it may be possible to rig extensions to the inner clip out points, to save carrying the extra pegs. This is a shame because as a budget tent it has it's plus points but it's let down by this.

Currently on offer at Millets for £15

That really is a bad flaw in the tent, I have a Vango that has an elastic guyline attached to the bottom centre of the rear of the centre which can be pegged to pull it taut.. that's what's needed there I think.

I'm sure there's a fix but, even though it's a budget tent, I'd hope that something like this wouldn't be the case.

Thanks for the review. I bought a North Face Tadpole (2 person) this year. Does great in all kinds of weather and perfectly fits a person and dog - would be very tight with two people.

Think I will stick with Coleman Avior 3.